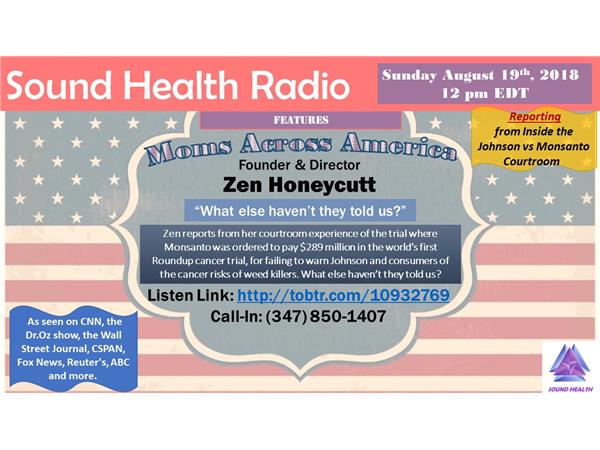 Zen Honeycutt, founder Moms Across America, reports from her courtroom experience of the Monsanto trial; ordered to pay $289 million

Season 6
(CNN)San Francisco jurors just ruled that Roundup, the most popular weedkiller in the world, gave a former school groundskeeper terminal cancer. So they awarded him $289 million in damages -- mostly to punish the agricultural company Monsanto. Dewayne Johnson's victory Friday could set a massive precedent for thousands of other cases claiming Monsanto's famous herbicide causes non-Hodgkin's lymphoma. Johnson's case was the first to go to trial because doctors said he was near death. And in California, dying plaintiffs can be granted expedited trials. In many ways it is the trial of the century.  If you never hear of glyphosate before – this whole thing came out of nowhere.  But Johnson v Monsanto – the case and the verdict -- has been decades in the making. Now the verdict is being felt on both Wall Street and Main Street in just about every country around the world.   Many countries are pressuring their governments to remove Roundup from store shelves.  Why? And why not the USA? Zen Honeycutt, founder Moms Across America, reports from her courtroom experience of the trial where Monsanto was ordered to pay $289 million in the world’s first Roundup cancer trial, for failing to warn Johnson and consumers of the cancer risks of weed killers.  What else haven’t they told us? Zen Honeycutts book: 'UNSTOPPABLE:  Transforming Sickness and Struggle into Triumph, Empowerment, and a Celebration of Community'