Robert Williams - Love is the Power: Moving Humanity from Fear to Love 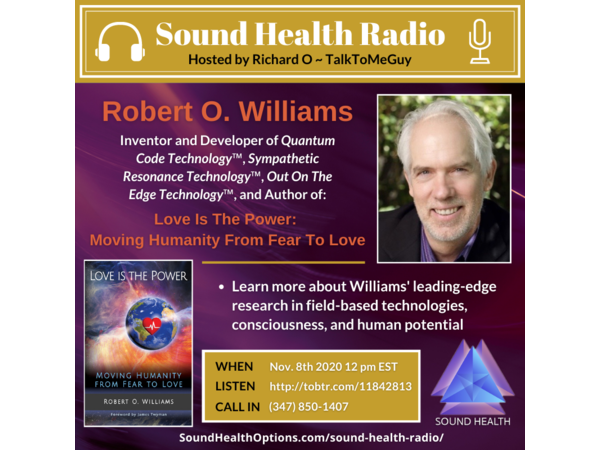 Season 6
Robert O. Williams is the inventor and developer of Quantum Code Technology™ (QCT™), and Sympathetic Resonance Technology™, (SRT™), and Out On The Edge Technology™ (OOTE™). Author of Love Is The Power: Moving Humanity From Fear To Love. An expert in the study of subtle energy engineering and its effect on physical systems, Robert’s research has provided scientific breakthroughs in field-based technologies, consciousness, and human potential. After a near death episode in 1979, his study of the relationships between particle physicality and the “spaces between particles” (or non-physical domains) led him to the discovery of the technology which, he claims, saved his life.  He calls the discovery more of a “revelation” than anything else.  He suddenly comprehended the profound interconnectedness of nature and the innate intelligence at the foundation of all life.  In his book, Love is the Power, Robert O. Williams leads readers into the intimate journey of his life through the vivid memories of his unique childhood, an inspiring account of his talent and perseverance as a saxophone player, his introduction to Transcendental Meditation, his magical time performing and recording with The Beach Boys, and the extraordinary journey through near-death experiences and visits with other dimensions which culminated in three decades of research and invention of Quantum Code Technology™.