How to Stay Ahead of the Law 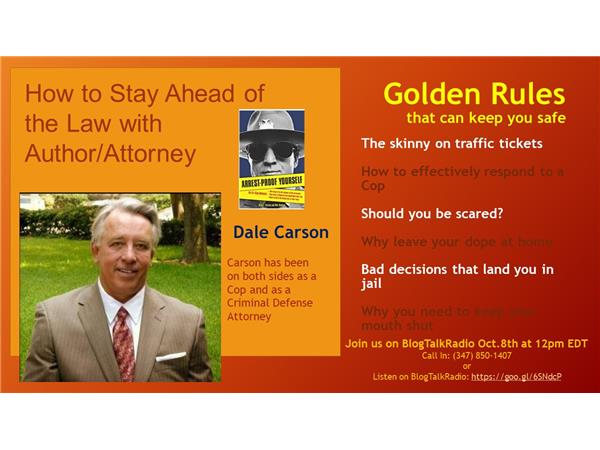 Dale Carson, Policeman, FBI agent and now Attorney - Learn his Golden Rules to keep us Safe from those who may seek to use their power to abuse us.

Season 1
Dale Carson is a former FBI special agent and police officer that now uses his knowledge of the law to fight for your rights. He feels that most people who get arrested aren't the worst criminals; they are just the most "clueless"—small-time offenders who make bad decisions and end up in what he calls the "electronic plantation." Now that computers make it ever so easy to track people, getting arrested, even if you're not ultimately convicted, can and will come back to haunt you. Carson will share his three golden rules to keep you safe.   Carson uses a blunt style to make important points about you and the law, but it's a style that is sure to hit home with his target audience—the underclass. And he does make it plain that while there are many middle-class and white-collar criminals, the police tend to focus their patrols in bad neighborhoods. Those most likely to be in situations where they or those they know might get arrested will get the most from his advice but even readers in more lofty areas with an interest in law enforcement could find much to discuss.—Jamie Watson, Harford County Public Library, MD Dale Carson Law Sound Health Options