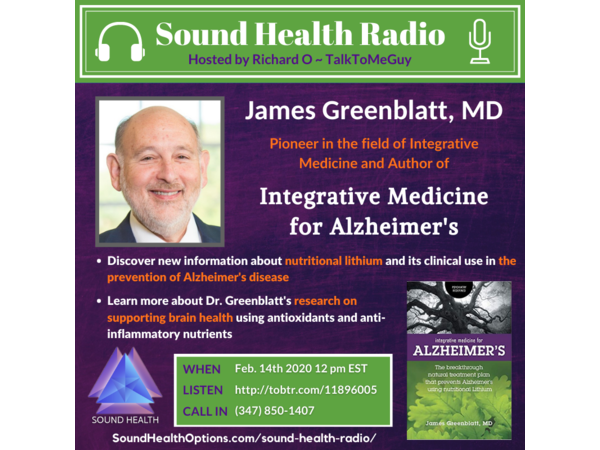 We talk with Dr. James Greenblatt about his book: Integrative Medicine for Alzheimer’s: The Breakthrough Natural Treatment Plan That Prevents Alzheimer’s Using

Season 6
Every 65 seconds, someone in the United States develops Alzheimer’s disease. The disease affects more than 5.7 million Americans; this year Alzheimer’s and other dementias are expected to kill more than 700,000 Americans over 65. In this country, Alzheimer’s disease is the sixth leading cause of death. One in three seniors dies with Alzheimer’s or another dementia. Pharmaceutical companies have not been able to produce a cure and the failure to do so is not due to lack of money or effort. One explanation for this abundance of failures is the nature of the disease itself: Alzheimer’s is asymptomatic until its damage may be irreversible.  The current absence of effective treatment for Alzheimer’s makes prevention even more critical.   The best intervention for preventing the multiple mechanisms that leads to Alzheimer’s is nutritional lithium. Researchers have concluded that nutritional lithium has a significant disease-modifying effect on preventing Alzheimer’s when initiated early and also improves cognitive performance in patients with mild cognitive impairment. Nutritional lithium protects brain cells from deterioration and even spurs cell regeneration. Integrative psychiatrist, Dr. Greenblatt has been prescribing nutritional lithium for more than 30 years.  Dr. Greenblatt believes that there are no side effects when using lithium because it’s used at microdose levels. James M. Greenblatt, MD joins us to talk about his book: 'Integrative Medicine for Alzheimer’s: The Breakthrough Natural Treatment Plan That Prevents Alzheimer’s Using Nutritional Lithium'